You are probably conscious about the outer game that you play continuously throughout your life – but are you also aware of your inner game?

The outer game is about what you wear, the car you drive or what your resume has on it.  From an early age we are taught to focus on the outer game.  You need to dress well for school.  Get an “A” in class.  Look good on the basketball court in front of your friend.  Name drop the ivy league university you went to.  Or show photos of the posh holiday resort you visited on facebook.  Have a trophy wife/husband.  Impress people with the car you drive and get a nice job title or the corner office.  Your outer game is what you think gets you the job (e.g the resume, the nice suit for the interview) or our partner in life (the way you look, the car you drive).

The inner game though is often forgotten about.  You aren’t taught to speak well to yourself internally.  So when you are going to the job interview and you have the shiny suit and everything polished on your resume but inside your head is a voice saying “there are so many other applicants for this job, I won’t get this job” or “I think I exaggerated a little too much on my resume, I don’t think I’m that good”.  Or you approach a potential date and you think “why would he/she go for me?”.  Or you go to a party and you think “I’m so boring, I feel sorry for the person who has to sit next to me at dinner”.  Or you are worried about the embarrassing acne you developed and that’s the only thing the people in the room are going to be staring at.

The inner game is a whole field that we have never been taught to focus on.  There are no “inner game” courses at school – while the outer game is taught to us all the time.  The advertising on TV tells us about the car we should be driving, the shoes we should be wearing or the body we should be having.  Or your parents tell you how your brother got an “A” in class and they are so proud of him (reinforcing the outer game).  So we have continued to focus our lives on the outer game.  The outer game is easier to measure (your bank account, car engine size, number of bedrooms in your house, grade point average, number of friends on facebook, votes during an election, job title, salary).

You realize that the outer game only gives you temporary happiness.  You got the BMW you wanted – it gave you a brief moment of happiness when you first bought it.  But now you are worried about the next model that will be coming out.  Or you are paranoid about people putting scratches on it.  Same for the big screen TV.  Its great.  Especially when you can invite friends over and they admire how cool your new TV is.  But then you start to think is that it?  You need the next toy or thing to improve your outer game.

So then you begin to realize that the inner game is something you have forgotten about.  The game that really matters as that’s the game that stays with you ALL the time.  Even the times when your ‘friends’ have gone home for the evening or your partner has gone to their own work.

You had focused on the external resume – but you forgot your internal resume.  This is the resume of things that you have done by yourself to “prove” to yourself that you can do it.

Once you can master the inner game is when you really start to perform.  Think about the best golfers, footballers and other athletes.  At the top level, the athletes have very little that differentiates them physically.  But the real difference between the Michael Jordan,  Tiger Woods or Roger Federer and the other athletes is the inner game.  They have the inner game that tells them that they can do it.  That they will beat any opponent and that messing up one “shot” isn’t the end of the world and they will recover.  Their inner game is so strong that they can serve an ace with millions watching or take a flawless penalty kick at the most intense moment of the game.

So what can you do to work on your own ‘inner game’?  Firstly, simply be aware of the inner game.  Be aware next time you are at a party, meeting a potential date or going for a job interview – what is your inner voice saying?  Are you comfortable being you?

Just being aware of the inner game will make you conscious of if you say encouraging or discouraging things to yourself.

Once you are aware than take some conscious steps to address your inner game – do you think a Tiger Woods would perform on the golf course if he had the same thoughts going through his head that you do at the event you are going to?

Next take steps to ‘reprogram’ your inner game.  Be aware – do you hang out with positive people or is most of your time spent with friends that find ways of putting you down.  As hard as it may be, try to limit the time you spend with negative people.  This will give you more room in your life to find more positive people to be with.

If you continuously watch the news than your inner game is also learning to look as if the ‘world is coming to an end’.  Trust me, as soon as you switch off from the news on the media – you will feel much better about the state of the world and begin to have a more positive outlook on people.

Try to read or listen to positive ‘inner game’ material.  This may be books, audio or going to seminars.  The bonus is that if you start attending seminars you will meet other ‘positive’ people to be around.

Find references in your own life where you have accomplished something.  You probably have a whole list of scenarios where you messed up at something stored in your head.  When you want to start a business, your inner game reminds of the time you got a “D” in math class – so you now “know” you will never be good at numbers so you will fail at the business.  Or you want to get in shape – but your inner game reminds you of the past few times that you tried and you only ended up gaining weight.  Or you want to quit smoking – but again you ‘always’ fail.

This is like Tiger Woods going up to put a crucial shot and only thinking about all the time that he really screwed up his shot.  Do you not think he thinks instead about the times he hit it perfectly?

So in that same manner, remind yourself of something you might have done – no matter how insignificant – that got you the result you wanted.  Perhaps you thought you were going to fail an exam but managed to get a ‘B’ instead.  Or you told yourself you would go for a jog 3 times a week and you did that for a whole summer.  Or you had a real tight-deadline at work that you didn’t think you would make – but you did.  Or you picked up a thick book that seemed impossible to read – but you got through it.  Or you had always wanted to visit Africa – and you did.

Give yourself little goals and little references that got you to achieve what you wanted.  You don’t have to compare yourself to Nelson Mandela (who at your age was probably still in jail) or a Tiger Woods.  Or your friends.  Just as long as you have little references in your own head of things that were a big deal for you – you probably don’t even have them listed on your external resume as to the external world they may be insignificant– but just do build them up on your ‘internal’ resume.  The one you don’t have to show anybody else.

Once you have become aware of your inner game and given yourself positive references from your past – work on growing those references.  How can you prove to yourself that you are capable of achieving what you set out to do?  Make some goals for yourself.  Perhaps its having a skydive.   Then instead of simply just having it on your list, go out and see where could you do it.  How much would it cost?  When could you do it?  And then actually go out and do it.

Build a whole series of exercises for yourself to make your inner game solid.  Tiger Woods was working on his game well before you or I ever heard of him.  He messed up some tournaments as a kid but he also won some.

We have a tendency to remember our own ‘failures’ whereas we look at a David Beckham or an Abraham Lincoln and see that “it was easy for them, they do everything right”.  The fact is everyone has their downsides.  Just like on your external resume you tend to highlight when you ‘accomplished’ things, so do most other people.  But internally some people often feel like fakes.  They feel that their resume is exaggerated.  That they should be a certain way but they are not.

Hence, you see the Kurt Cobain (Nirvana) or other rock stars that rise to fame quickly go through their drugs and other rebellious stage as they are trying to cope by not being “fakes”.  Their external resume tells them that they should be “rock stars” and act a certain way and be happy.  But their internal resume tells them that they don’t deserve to be there and that they will soon “be found out” that they are not really “rock stars” but simply “normal people”.  Their inner game has not caught up to their outer game.

Once you get the inner game right you will worry less about your job title, your car or the other status symbols you have on the outer game.  You will feel happier with what you have right now – rather than the things that you are ‘missing’ right now.  Even if a company/person turns you down for a job/date – your inner game will tell you that the company/person wasn’t right for you, rather than telling you that you are a ‘loser’. 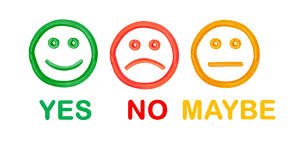 Maybe they are right.  Maybe you really can’t make that business a success.  And maybe you won’t be a successful artist/musician/director.

Or maybe your innovation will change the world.  Maybe your site will be bigger than facebook.  Maybe you will find the person of your dreams to live the rest of your life with.  Maybe you will have companies begging you to join them.  Maybe the crowd will love your speech.  Maybe your book will become more popular than Harry Potter.

Your life is a collection of “maybes”.  Until you go out and make it happen, you don’t know which side of the maybe you will end up on.

The only certainty is that unless you go do something, you will definitely not get there:-)